I’m not quite sure how to describe the project. I was at my local electronics surplus store and found these cool little analog counters and wasn’t quite sure what to do with it. I thought about making an analog hit counter for this website, but then again it probably wouldn’t be fun to watch it tick change once every couple of weeks. 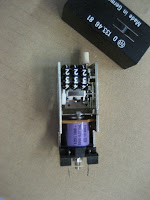 So I eventually ended up just putting it in a nice Black Walnut box with Wenge accents. The build photos are in my Flickr set. So far this has been pretty fun…people have a hard time walking by it without hitting the button a few times. At one point I debated on putting a loud buzzer in the box…I opted not to do that and I’m glad. Occasionally my kids will push the pick button 1000 times to see it turn over…even after warning them many times that going past 999 would undo space and time as we know it.
For those with nothing else better to do, I have also posted some video of a guy pushing a button.